The Holiday Party 2013 is an upcoming party in Club Penguin that will occur from December 19, 2013 to January 2, 2014. It was first confirmed in an interview with Spike Hike. Rockhopper will visit the island during the party, and the traditional Coins for Change will be taking place with a new design and format from past years.

A background for the party.

The membership page for the party.

The Ski Village during the party. Note the exclusive party emoticons.

The Holiday Train. Note the old Friend request icon at the top.

Supposedly the end of the Holiday Train.

An exclusive Igloo you will be able to earn. Note it is a red version of the Frost Bite Palace Igloo.
Add a photo to this gallery

The first homepage graphic of the party

The first log-in screen of the party

The first Logoff Screen of the party.
Add a photo to this gallery 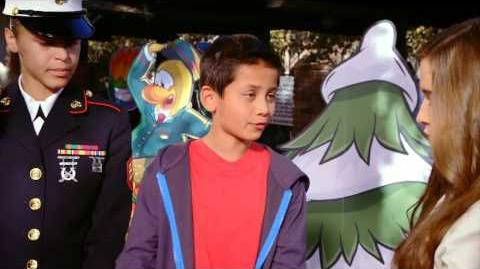 Disney Club Penguin Coins For Change 2013 Game On Commercial
The "Game On" trailer.
Add a photo to this gallery