The Hot Sauce 3000 was a large bomb in the process of being built by Herbert P. Bear. The device consisted of the destroyed remains of the Solar Laser from Operation: Blackout. He intended to use it to make Club Penguin Island into a tropical paradise and as a result heat the island. To function as intended the bomb required a lot of hot sauce, causing Herbert to steal the giant hot sauce bottle connected to the oven at the Pizza Parlor.

It was destroyed during Operation: Hot Sauce when the EPF Agent fooled Klutzy into flooding Herbert's Hot Sauce Lair. 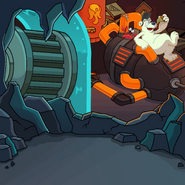 Retrieved from "https://clubpenguin.fandom.com/wiki/Hot_Sauce_3000?oldid=1834119"
Community content is available under CC-BY-SA unless otherwise noted.