Ice Fishing was a game played outside the Ski Lodge which could be accessed by clicking on the wooden door with a fish above it.

The objective of the game was to catch at least 60 fish before losing all the worms. The player fishes through a hole in the ice. Underneath the hole lay fish but also other potentially dangerous obstacles such as crabs, jellyfish and sharks. The maximum number of fish the player could catch was 64. The player started out with 3 worms for bait and could catch bonus bait throughout the game. Players could catch a Gray Fish if they wore the Flashing Lure Fishing Rod, but they were harder to catch.

The 2011 title screen of Ice Fishing

The venue for Ice Fishing 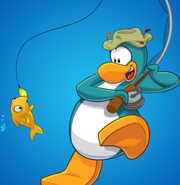 A penguin getting shocked on line 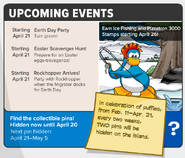 A Penguin fishing as seen on the beta game

The door to the game in the old Ski Lodge

When you catch the Mullet