Ice Hockey is an unofficial game that is played in the Ice Rink. To play, the player must push the puck inside the goal-post by running at the puck. This game will not give any coins or rewards. Ice hockey can be played by an unlimited amount of penguins in a game (the maximum being the number of penguins that the room can hold).

The Ice Rink was replaced by the Stadium from the Penguin Games which were modeled on the Olympics. The soccer ball acted like the usual puck.

The "official" hockey teams are red, blue, green, and yellow- however, fan-created colors do exist.

An article about ice hockey 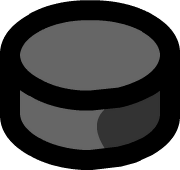