The Ice Rink was a sports rink covered in ice, and was the counterpart to the Stadium. Located near the Snow Forts, penguins were able to play ice hockey here on the ice-covered ground, by sliding around, and pushing the puck into nets. The Ice Rink was open only in the winter and spring months of the Northern Hemisphere. The Snow and Sports catalog was also located here.

On either side of the Ice Rink, there were bleachers for watching games. The rink itself contained five red lines, representing face-off circles, and two goal nets. On the north side of the rink, there was a stand for announcers, and a snack stand. Next to the snack stand there was a path leading to the School.

The following are the dates the Ice Rink was available until.

The Ice Rink was one of the original rooms in Club Penguin. When first opened, there were lights on the edges of the rink. There was also only a single set of bleachers, with a sign that read "SUPER RINK" above. During the Sports Party, scoreboards were added above the goals. However, they were removed a few weeks later, due to glitches.

On December 4, 2013, when the Ice Rink was brought back for the year, the sport booth was removed in place of a path to the School, as the Stadium also did. The rink also received a graphical update.

The Ice Rink was renovated on December 20, 2010, when it came back at the end of the year. While the rink itself did not change, its surroundings did. To fit with the renovation of the Stadium from earlier that year, a second set of bleachers were added, along with announcer and snack stands, and a small sport booth, coinciding with the move of the Snow and Sports catalog. 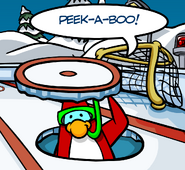 A penguin with a green snorkel below the Ice Rink

View from the Town