Igloos are the natural homes of penguins, where they live, in addition to any puffles they may have. Players can decorate their igloos with many various types of furniture, as well as flooring, or even change the scenery behind their igloos.

There are many variants of igloos, most of which can only be bought by members from the Furniture & Igloo Catalog, although some can be obtained from parties, or by codes. Some igloos are also available for all players. All players start with the Basic Igloo.

A list of online, opened igloos on a server can be accessed by clicking on the igloo on the map.

The former igloo lock while being opened

The former igloo lock while being closed

The icon on the Toolbar

The old icon on the Toolbar

An igloo as seen on the map

One of the original concept designs for Club Penguin igloos

A penguin inside an igloo 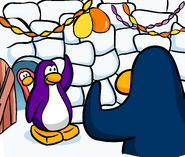 Penguins throwing a party inside an igloo, as seen in a Stamp Book photograph

The unused Loft Igloo, as seen in a promotional video

The igloo in Penguin Chat