Were you looking for the Backyard Igloo?

The Igloo Backyard was an additional area to the player's igloo, where puffles could be moved to and from the igloo. The feature was added on January 23, 2014, and was confirmed by Polo Field on January 9, 2014. The area of the backyard was determined by the Igloo Location of the player's current igloo.

The Igloo Backyard could hold up to 75 puffles. Puffle's statistics remained frozen while they were in the backyard, meaning that they would never run away as long as they were there.

A sneak peek from The Spoiler Alert 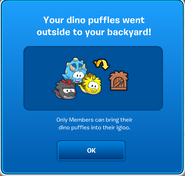 An article about the Igloo Backyard in the Club Penguin Times

The original welcome message, when the limit was 40 puffles

The second welcome message, when the limit was 50 puffles

The most recent welcome message