Introduction to Club Penguin was a welcome interface that was added on December 19, 2013. The feature introduced new players to Club Penguin to some of the features in the game. It replaced Welcome Solo, which played a similar role since June 2011.

A tour guide taught the player how to use the Map, how to earn coins, and introduced the Clothes Shop, Pet Shop and to the player's Igloo. By going to each one of those places, the new player received a special gift. Also, the tour guide mentioned what party was held at the moment. 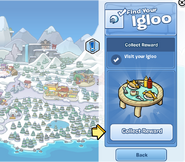 During the Puffle Party 2015

During the Fashion Festival
Add a photo to this gallery

Start a Discussion Discussions about Introduction to Club Penguin