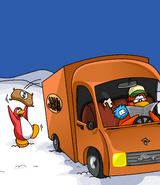 The Card-Jitsu power card this truck is featured in

The truck in Bean Counters. Note how big it is compared to a penguin

The fish logo on the front of the truck
Add a photo to this gallery
Retrieved from "https://clubpenguin.fandom.com/wiki/Java_Delivery_Truck?oldid=1904864"
Community content is available under CC-BY-SA unless otherwise noted.