Jeff was the referee in the plays Team Blue vs. Team Red and Team Blue Rally 2. He was a lime green penguin, and he wore the Referee Jersey and the Silver Whistle. He also appeared in Club Penguin: Game Day!

Jeff the Ref made his first appearance as a character in the Stage play Team Blue Rally 2. He was known as simply "Jeff".

Jeff made his second appearance in the sequel of Team Blue's Rally 2; Team Blue vs. Team Red.

Jeff also appears in Club Penguin: Game Day!. When you ask the captain of your team (depending on the team color) the first question, the captain will mention Jeff the Ref. Jeff is seen at the Town, Snow Forts, Dock, Beach, Ski Hill, and Ski Village, which means he can be seen in all places.

Off the court, Jeff is an average citizen. But on the court, he is The Law. Watch out!
"When this ref calls foul, you best throw in the towel." 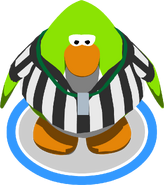 What Jeff The Ref could have looked like in-game