A Jet Pack or Jetpack is a popular form of transportation in Club Penguin that was invented by G. It is most commonly used in Jet Pack Adventure. Two of the most well known users of the jetpack are Jet Pack Guy and Jet Pack Surfer. The Jet Pack works with Jet Pack Fuel but it can also fly with a mixture of Cream Soda and Hot Sauce. This was revealed in PSA Mission 10: Waddle Squad.

The Jet Pack's building process started in September 2006, as a result of the project for a new invention taking off (much to the help of leftover funds from the Lighthouse Restoration Project).[1] In the same month, Launch Pads began appearing in various rooms in Club Penguin, accompanied by a crane, hinting at the game which would launch in November 2006, Jet Pack Adventure.[2][3] It was also by November 2006 that the Jet Pack was finished being built.[4] 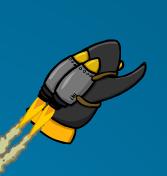 A penguin using a jetpack 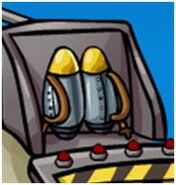 The Jetpack in the Beacon

The Jetpack has its own game named Jet Pack Adventure 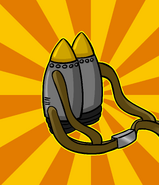 A penguin wearing a Jet Pack

In the Surf Hut at the Cove

A membership card with an unlockable Jet Pack 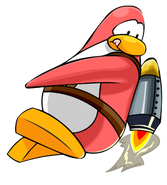 A peach penguin looking at the jet pack 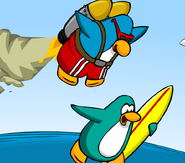 The Jet Pack Surfer helping a penguin who is surfing 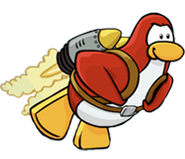