Players traveled from location to location using a jet pack, collecting coins along the way. Players carried an extra jet pack as a precaution if they run out of fuel, and more jet packs could be collected. However, if the player ran out of jet packs, its penguin would fall then use a parachute to land safely (in the Mine levels, the parachute would get stuck on a stalagmite). Extra fuel could be collected, but you had to watch out for anvils and coffee bags. Another occasional obstacle would come, such as a shark.

Players could send a postcard to a friend to go on a Jet Pack Adventure (which sent the player to the Beacon). On July 26, 2010, the game was changed so only the first level of Jet Pack Adventure was playable for non-Members. Only members could play the entire game due to the addition of the new stamps that were released that day. Another change was that the home-screen was updated. As of September 13, the player's Green Puffle could assist during flights, it would fly around the screen collecting coins and fuel cans.

There were many obstacles in the game, specifically designed to slow the player down and make them lose fuel. Here is a list of all of them: 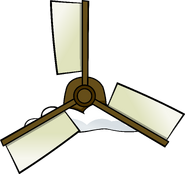 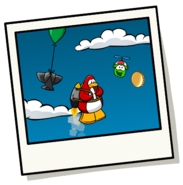 A player playing jetpack adventure with their Green Puffle 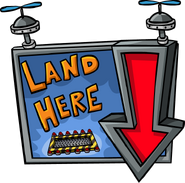 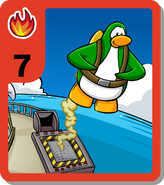 Jet Pack Adventure on a card 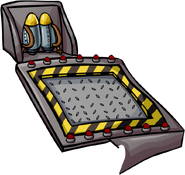 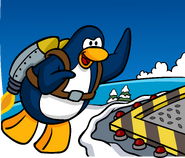 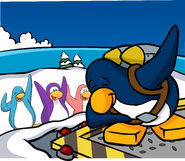 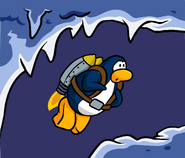 Flying through a cave as seen in a Stamp Book photograph 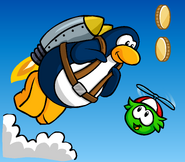