Jet Pack Guy (real name Guy) is an Elite Penguin Force Agent in Club Penguin. He is always seen wearing his jet pack, which is his preferred form of transportation, and his glasses, which he almost never takes off.[1] Jet Pack Guy is shown to be very focused, thoughtful, and strategic -- traits which qualify him as the Tactical Lead of the EPF, alongside Rookie.[2]

When Jet Pack Guy was first introduced, he seems to have been somewhat of a nice guy, and a skilled agent. As his character has developed we see him as more as a serious agent who is very stern and self-disciplined. His goal is to become a great EPF agent. He also really loves his Jet Pack.

Jet Pack Guy is loyal, determined and self-disciplined. He is shown to have a lot of courage and is quite resourceful.[1]

Jet Pack Guy first appeared in PSA Mission 2: G's Secret Mission, in which he comes to rescue the player from the wilderness. The sound of his Jet Pack wakes you up on the second day as G had sent him to track you down and bring you back to the HQ. Not much of him was seen again until PSA Mission 10: Waddle Squad, as a member of the Waddle Squad, a group of Secret Agents who tried to capture Herbert. His Jet Pack crashed at the Beach, however, with a mixture of cream soda and hot sauce, he was able to refuel it. Later, he was fooled by Klutzy into thinking Herbert was at the Dock due to Klutzy's fake Polar Bear cut-out. Then he helped trap the real Herbert P. Bear in the Night Club. He made a brief appearance in PSA Mission 11: The Veggie Villain inspecting the disappearance of several items in the Gift Shop. In Operation: Blackout he was captured along with the other significant agents by Herbert P. Bear. Jet Pack Guy participated in Operation: Hot Sauce at the Pizza Parlor on April 2013.

JPG: Hello Rookie. It's been busy.

Rookie: Okay, first question. Well, second maybe? I don't know. Is it the first or second?

JPG: That was the second.

JPG: Is this the "really important project" you need help with?

Rookie: Ya! You're helping me with this interview, buddy!

Rookie: What is that? It sounds really cool. Hmm...what else should I ask?

Rookie: That's it! The perfect question: what is the secret fifth class of the EPF?

Rookie: He flew away! Must've had an important mission. This is Rookie signing off. Sign off! 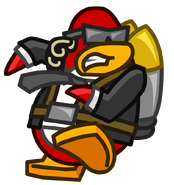 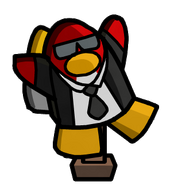 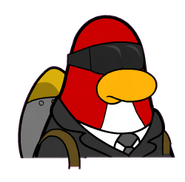 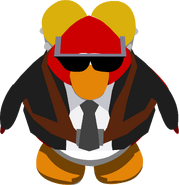 Jet Pack Guy at the Stage

Jet Pack Guy during a Mission 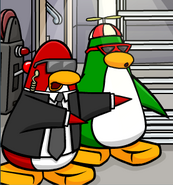 Jet Pack Guy as seen in the Animated Shorts

As seen on the Cinematic Trailer for the Star Wars Takeover

Jet Pack Guy along with Herbert in the app version of the Operation: Crustacean 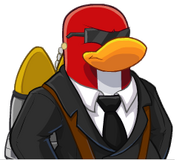 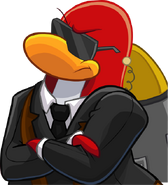 Another picture of Jet Pack Guy during Operation: Hot Sauce

Jet Pack Guy as he appears in PSA Mission 10 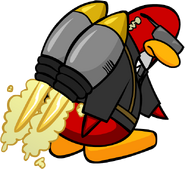 Jet Pack Guy about to take off in Mission 10

Jet Pack Guy reading The F.I.S.H during The Veggie Villain

During the player's surprise party

While in a Halloween costume 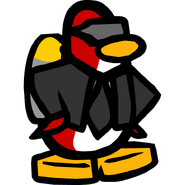 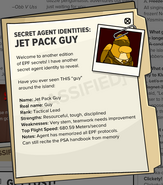 Jet Pack Guy's identity was revealed in the Club Penguin Times by Herbert in Operation: Blackout. In addition, it revealed that his real name is Guy 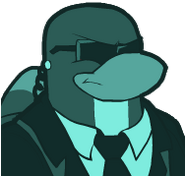 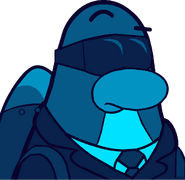 His former Avatar in the EPF Spy Phone messages 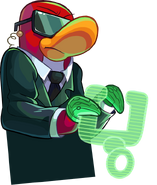 Name in other languages