The Joyful Juggler is the name of an act which was performed by a Green Puffle at the Great Puffle Circus available to all Fairs. It was the fifth act in the circus. This is one of the first acts you could have seen, because when a new puffle is added, another act appears featuring that puffle.

When you clicked on the green puffle icon on your screen, a green puffle comes into view on the screen on a unicycle, and three small balls land on the puffle's head. The puffle rolls onto a tightrope on the unicycle and juggles the tiny balls in the middle of the tightrope. How it juggles is unknown. When it is finished, it smiles hugely and hops out of sight at the top of the screen. 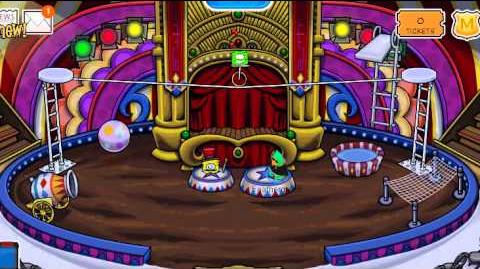