Kermit the Frog is the most famous Muppet, who will make an appearance at the Muppets World Tour as a mascot. Members will be able to buy his costume at the party. Kermit the Frog enjoys the Muppets’ return to fame following their latest big-screen hit—until they kick off a global tour and he’s mistaken for the World’s Number One Criminal, Constantine.

Kermit the Frog, arguably Jim Henson's most famous Muppet creation, was the star and host of The Muppet Show, played a significant role on Sesame Street, and served as the logo of The Jim Henson Company. He continues to star in the Muppet movies and makes numerous TV appearances.[1] 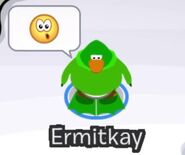 Kermit's penguin in the first teaser.

Kermit the Frog in real life. 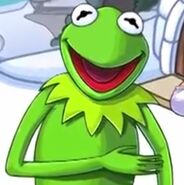 Retrieved from "https://clubpenguin.fandom.com/wiki/Kermit_the_Frog?oldid=1317726"
Community content is available under CC-BY-SA unless otherwise noted.