Klutzy is a villainous crab in Club Penguin who saved Herbert P. Bear from drowning when he first arrived on Club Penguin Island after traveling from the North Pole on an iceberg. Since then, he has been involved in a lot of Secret Missions as Herbert's sidekick. As revealed in The F.I.S.H., Klutzy is male and is probably Herbert's best friend.

Klutzy, before becoming Herbert P. Bear's accomplice, was once a normal crab in the Club Penguin Island. The two became friends when Klutzy rescued Herbert from drowning. Since that day Klutzy has assisted Herbert in his scheme of destroying penguins, though his impact on events is minimal and Klutzy instead often functions as an omen to Herbert's appearance.

Klutzy stealing the target in Mission 7

Klutzy playing with a beach ball during Mission 9 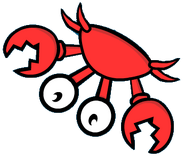 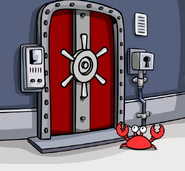 Klutzy trying to escape the HQ in Questions for a Crab

Klutzy stuck in a cage in Questions for a Crab 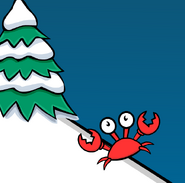 Klutzy falling in Questions For A Crab 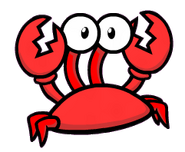 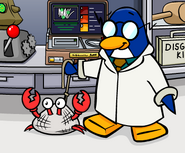 A captured Klutzy being held by Gary

His appearance on the character page

Klutzy being poked in the eye by Herbert 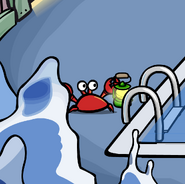 Klutzy's appearance during the Water Party 2008

Klutz hiding in the Halloween homepage 2011 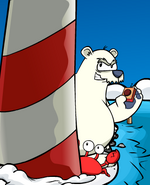 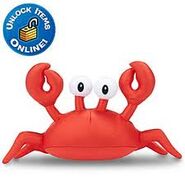 Klutzy alongside Herbert during Operation: Blackout 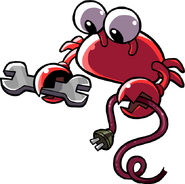 Klutzy holding a wrench and a plug 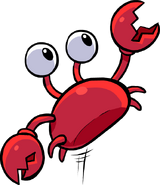 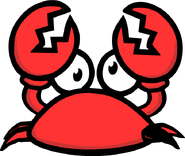 A silhouette of Klutzy 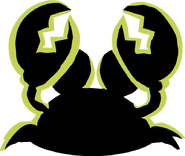 Another silhouette of Klutzy ducking 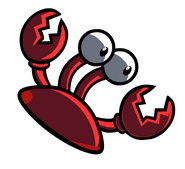 A cutout of Klutzy without feet 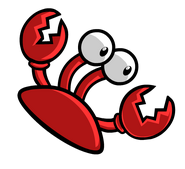