Lightsaber Duel, or Lightsaber Battle,[1] was a members-only activity available during the Star Wars Takeovers. They focused on lightsaber combat from the Star Wars universe; imitating the slashes incorporated into the choreography.

To start a duel, press D or dance while wearing any lightsaber. Two circles will appear above your penguin. This will allow another player to battle you, or you can click a circle above another penguin to duel them.

If both players click the same arrow, it will be a tie.

Waiting to duel with the Inquisitor's Lightsaber 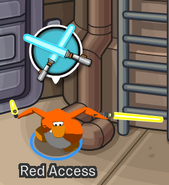 Waiting to duel with the Dual Lightsabers

Glitch when waving and dancing at the same time 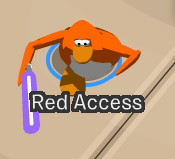 Waiting to duel with the Purple Lightsaber 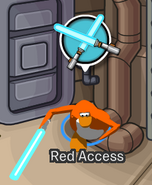 A penguin waiting to duel 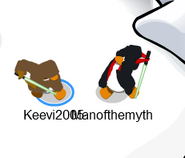 A penguin about to strike another 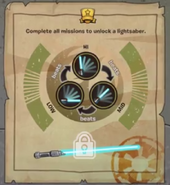 Retrieved from "https://clubpenguin.fandom.com/wiki/Lightsaber_Duel?oldid=1879457"
Community content is available under CC-BY-SA unless otherwise noted.