This page lists disasters in Club Penguin. There are than 25 known disasters which happened.

Penguins often turn the disasters into parties. These parties can cover repairs and sometimes PSA or EPF operations if the disaster was not natural but caused by Herbert.

The first Blizzard occurred just before the Christmas Party 2006 started. The snow was so high that penguins had to dig tunnels to get around. Once the party had ended, the snow was stored in the Lodge Attic, cooled by the AC 3000, to be used during the Festival of Snow 2007 that was held February 2007. This storm also hit Rockhopper and his ship.

Two years later, at the Christmas Party 2008, a second blizzard struck, once again forcing penguins to dig tunnels to navigate the island. Once again, the snow was stored in the Lodge Attic, but this time it wasn't reused and was instead disposed of in April.

The first storm in Club Penguin was seen on June 22, 2007, through the Cove Binoculars. Though the storm could be seen in the distance, large chunks of ice could be seen flowing past the Cave windows. The survival level of Catchin' Waves takes place during this storm.

The next year, the Storm of 2008 hit. This was the longest and most intense lightning storm that had ever struck club penguin, lasting just over two months and occuring at the same time as a Category 5 Hurricane. Penguins were advised to stay away from high locations such as the Ski Hill and Dojo, and for good reason as the Dojo was eventually struck by lightning causing significant damage to its roof.

The Great Storm of 2009 was another storm-related event that occurred due to the volcano pouring out more smoke, which then condensed into low storm clouds.

Similar storms continued to form annually during each Halloween Party.

Main article: The Great Storm of 2010

The Great Storm of 2010 was a large rainstorm that struck the island in October, 2010. This was the first documented time that it ever rained on Club Penguin and, as such, Sensei took it as a sign that it was time to open up the Water Dojo to teach Card-Jitsu Water.

An avalanche occurred between July 27, and August 3, 2007 and could be spotted at the Mine Shack, Iceberg and Ski Village. The avalanche that hit Ski Hill broke the Ski Lift, so the Mountain had to be closed. Four penguins were stranded by the avalanche and had to be saved in PSA Mission 4: Avalanche Rescue. Though it is unconfirmed, Herbert P. Bear seemed to play some part in the creation of these avalanches.

Another avalanche occurred before the Card-Jitsu Party 2013, once again burying the Dojo in snow. This avalanche was created by Tusk and served as a warning that he had returned and wanted revenge. Sensei responded by releasing Card-Jitsu Snow. 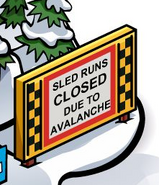 The sign in the Ski Village after the avalanche

The Mountain after the avalanche

The Mine Shack after the avalanche

The Dojo after the avalanche.
Add a photo to this gallery

Before November 7, 2013 there were light tremors in the Underground. On November 7, 2013, the Cave Mine was blocked due to its both entrances being covered in rocks. The Club Penguin Times confirmed that there had been a cave in, and Construction Workers had discovered another cavern near the Cave Mine. Pages of Garianna's book were also found near the second cavern. The Mine and the Hidden Lake were damaged, but the Cave Mine was closed after it collapsed.

The entrance to Cave Mine blocked at the Mine

The Earthquake in the Town

A Rockslide was initially spotted at the Mine, on the 8th of January 2010. On the updates of January 15, a big rock was seen above the Rockslide. If you hover your mouse over it, the big rock will fall, revealing a cave. After a few days the Cave Expedition started on January 22, 2010, allowing penguins an access to the Cave Mine, the Hidden Lake, and the Underwater room. The expedition ended on January 28. As result of another rockslide, the caves were sealed off. 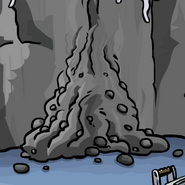 The Rockslide on January 15, 2010
Add a photo to this gallery

Just before the Water Party 2007, a crab broke the glass in the Cave, causing a flood. The Water Party was held as a fun way to drain the water and return the island to normal.

In Club Penguin: Elite Penguin Force: Herbert's Revenge, Herbert caused a massive flood with the Mega-Magnifying Glass. It made a hole near the Mine Shack and nearly caused the island to sink. The hole was quickly plugged by an unfinished sculpture of herbert. The water from the flood covered the west side of the island, so a water party was hosted so that no penguins got suspicious of what had happened. 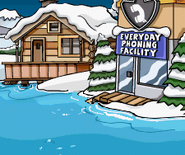 The first flood of Club Penguin

The inclination took place between January 26 and February 1, 2012. The entire island of Club Penguin was tilted because of a huge load of anvils that were placed at the Beach. It caused many parts of the island to be submerged, including Toughest Mountain, where Herbert P. Bear was hibernating thanks to the EPF. The Polar Bear presumably woke and escaped as the water flooded his hideout. At first, many thought that all these events were Rookie's fault, who had ordered the anvils placed at the Beach for the Underwater Expedition. However, it was later revealed that someone else had tripled the order of anvils, leaving some to suspect Klutzy the crab, who was not in EPF custody at that time.

On June 7th 2012, the Purple Super Hero Meteorite crashed into the Dock. While no one was harmed, the meteorite's energy gave rise to Super Heros and Super Villains. That energy also gave power to the Ultimate Proto-Bot 10000, and it built the Destructobot to attack the Club Penguin Island. The meteor's energy was later used to power the Time Trekker 3000 in late 2012.

The meteor strike at the Dock
Add a photo to this gallery
Retrieved from "https://clubpenguin.fandom.com/wiki/List_of_disasters_in_Club_Penguin?oldid=1921723"
Community content is available under CC-BY-SA unless otherwise noted.