The Magic Wand is a slightly rare Hand Item in Club Penguin. It is only for members and costs 125 coins, unless it was unlocked from the Treasure Book with a coin code, but it is no longer available there since all of the series were replaced. 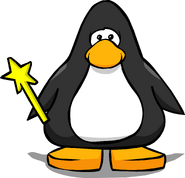 On a penguin's Player Card. 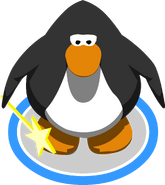 In-game.
Add a photo to this gallery

Retrieved from "https://clubpenguin.fandom.com/wiki/Magic_Wand?oldid=884338"
Community content is available under CC-BY-SA unless otherwise noted.