Club Penguin Wiki
Register
Don't have an account?
Sign In
Advertisement
in: Parties, 2012, Parties of 2012,
and 2 more

The Make Your Mark: Ultimate Jam was a party in Club Penguin, that started on July 19 and ended on August 1, 2012. It was confirmed on the UK Disney Website,[1] then on the What's New Blog.

Disney Channel's characters CeCe and Rocky from the show Shake It Up appeared as mascots at the party. Cadence and the Penguin Band also made appearances during this party. The theme song for this party was The Party Starts Now. 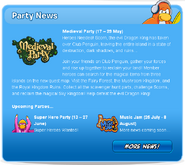 The update confirming it

A sketch of the Town

Proof that the Penguin Band were coming

A sneak peek of the Dance Club by Happy77

A sneak peek of the Plaza.(note the auditions in Stage)

A sneak peek of the Ski Village

A sneak peek of the Stage

A sneak peek of the Beach

A sneak peek of the Cove

Continued information about the concert 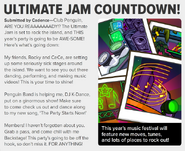 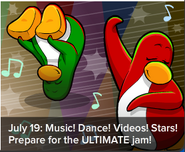 More information about the party

Cadence with the party's logo

CeCe and Rocky with the party's logo

News about the party in the Club Penguin Times Issue #353

More news in Issue #353 of the Club Penguin Times

First login screen of the party

A Log Off Screen before the party.(Note: The green puffle.)

Epic Show, while the band and Cadence performed

The view from the Beacon Telescope

The first page of Make Your Mark Catalog

The second page of Make Your Mark Catalog