Mancala was a mini-game in Club Penguin. It was one of Club Penguin's oldest games. During Beta Testing it was playable in the Coffee Shop, however, soon after it was moved to the Book Room. Only 2 players could play it, and the objective of the game was to collect from the board more stones than the opponent, before one of the players clear his side of the board. It was based on the real life game Mancala.

Players alternate turns. In his/her turn, each player had to select a group of stones from one hole on his/her side of the board. Each stone was dropped one by one in the holes around the board, including his Mancala, but not the opponent's Mancala.

Each player attempted to collect as many stones as possible before one of the players clears his/her side of the stones. 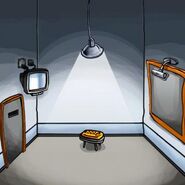 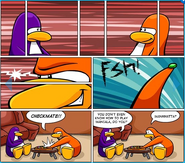 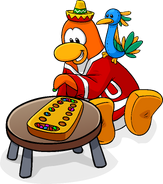 Retrieved from "https://clubpenguin.fandom.com/wiki/Mancala?oldid=1805320"
Community content is available under CC-BY-SA unless otherwise noted.