The map is a feature in Club Penguin Island that allows penguins to travel to a zone without physically walking there. It is accessible by tapping the bottom-right corner of the screen. This button was previously the settings button, but was moved after the new CPI Phone was introduced in the 1.2.0 update of the game.

The map displays the island, and five icons, corresponding to the Beacon Boardwalk, Coconut Cove, The Sea Caves, Mt. Blizzard, and Island Central. Tapping an icon displays the name of the area, and a meter displaying the overall population of the zone. Tapping it again teleports the player to the selected zone. 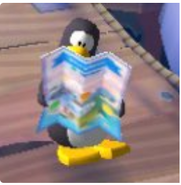 Retrieved from "https://clubpenguin.fandom.com/wiki/Map_(CPI)?oldid=1898760"
Community content is available under CC-BY-SA unless otherwise noted.