Power Crystals were giving everyone powers this time around. Ultimate Proto-Bot 10000 unleashed robot enemies on the city that Super Heroes are needed to face.

It is the second annual Marvel Super Hero Takeover. It involved the Marvel Comics characters from the previous year. The Marvel Catalog returned with new items. Aunt Arctic is waddling around during the party. Club Penguin made this party to promote the new Marvel movie, Iron Man 3.

Crystals appear on the island mysteriously, giving penguins powers. While some choose to use it for good, others choose to cause mass destruction with it.

Its powers restored by the crystals, Ultimate Protobot 10,000, and The Mandarin as his second-in-command, lead an army of robots to destroy the city, as revenge for the defeat of Destructobot. Other Super Villains also join him in his quest to take over Club Penguin Island. Their plan is to turn Club Penguin Island into an advanced technological metropolis, inhabited completely by robots. The Elite Penguin Force will be finished, and Protobot would use its technology. Puffles, games, and pizza would be removed. All penguins would be turned into robots. Herbert and Klutzy would be forced to leave.

Super Hero teams such as The Avengers and the EPF, as well as the Club Penguin Police Department, are called into battle once again to defend the city, and new heroes also appear and offer to help defeat the robot army. Heroes gather at the Hero Carrier to hear orders and come up with battle tactics. Tony Stark (Iron Man)'s home, Stark Tower, is used as a hangout and lab area, where scientists work on new Iron Man armor to use in the fight for justice. Meanwhile, Protobot and his minions are building robots in the Villain HQ to cause mass destruction to the island. As this war rage on, the fate of Club Penguin hangs in the balance.

After two weeks of fighting, Protobot and the crystals disappear, and the rest of the villains are defeated, meaning the island is safe once again.

Calling all Marvel fans! From 25 April – 7 May, choose a side at the Marvel Super Hero Takeover on Club Penguin. As a villain, check out the Villain HQ, and build robots to cause chaos. Or gather with your hero friends in the Hero Lab and bring justice to the city. Paid members can suit up in more than 25 Marvel costumes! New Heroes. New Villains. Who will rise to victory? Join the epic battle at the Club Penguin Marvel Super Hero Takeover at clubpenguin.com.

Are you a Super Hero or Super Villain? Choose your side and suit up!

Penguins are once again assembling as Marvel super heroes and super villains in Disney's "Club Penguin," the #1 virtual world for kids, for this year's all-new Marvel Super Hero Takeover event.

Starting today, penguins will be called to defend the city of Penguintropolis and bring members dressed as Marvel super villains to justice before they take over with their destructive robots. After choosing sides, members can suit up in over 25 Marvel costumes such as super heroes Iron Man, She-Hulk, Captain America and Sif or the more mischievous ensembles of Marvel super villains such as the Mandarin and Loki.

Join the Marvel Super Hero Takeover in Disney's "Club Penguin" from Apr. 25-May 7 "Last year's partnership event with Marvel was tremendously popular, and at that time became the most-trafficked event in our history," said Chris Heatherly, Vice President and General Manager, Disney Interactive Worlds. "This year we've made the Marvel Super Hero Takeover Event even more epic for players with twice the amount of Marvel super hero and super villain costume options and deeper, more action-packed gameplay and storylines."

"The fan reaction from last year's Marvel Super Hero Takeover was tremendous, so we are excited to once again give fans the opportunity to dress up as their favorite Marvel super heroes in 'Club Penguin,'" said Andreea Enache-Thune, Senior Vice-President of Marvel Games. "This year we were able to expand upon last year's offering by including cool new costumes from our upcoming Marvel animated series on Disney XD."

-Members can suit up in 27 different Marvel super hero and super villain costumes, while all players can dress as cops, robbers and civilians

-Super heroes can plan their defense strategy in the Hero Lab, while super villains can scheme in the Villain HQ, building eight different kinds of destructive robots

-Members can buy new super igloos like the Secret Base, an impenetrable HQ perfect for super heroes, while super villains will feel right at home in the new Creepy Cavern

-Marvel costumes feature characters from the new animated series "Marvel's Hulk and the Agents of S.M.A.S.H." including She-Hulk, A-Bomb, Red Hulk and Skaar. The series premieres August 11 inside Marvel Universe on Disney XD. "Club Penguin" fans of "Marvel's Ultimate Spider-Man" can also dress up just like Iron Spider. And don't forget Iron Man, Hulk, Captain America and Thor, who join forces in "Marvel's Avengers Assemble" with a one-hour preview May 26 and launching on July 7 inside Marvel Universe on Disney XD.

Members could suit up in special Marvel Super Hero and Super Villain Costumes, exclusively during the party. 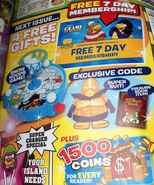 Confirmation about Aunt Arctic coming to the party 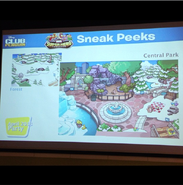 A sneak peek of A-Bomb's costume from Club Penguin's Twitter

A sneak peek of Skaar's costume from Club Penguin 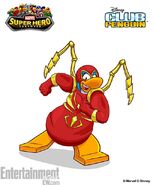 A sneak peek of Iron Spider from an article of EW

Another sneak peek from EW about Red Hulk

Protobot reveals his plan in the Club Penguin Times 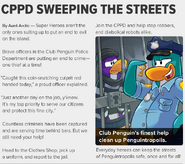 Sections of some rooms could be damaged by throwing snowballs at them while wearing special gloves, or fixed by using the Construct Power Gloves. These images display the appearances of rooms when all sections were damaged.

The Homepage for the party

The first Login Screen for the party

The Second Log-in Screen of the Party

The third Login Screen for the party

The second Logoff Screen for the party 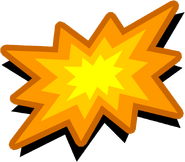 The heroes on the logo

A wallpaper for the party

One of the special games, Super Hero Bounce 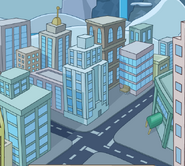 The Choose Your Side screen

One of the special games, Robot Factory

Concept art of the Town 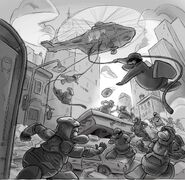 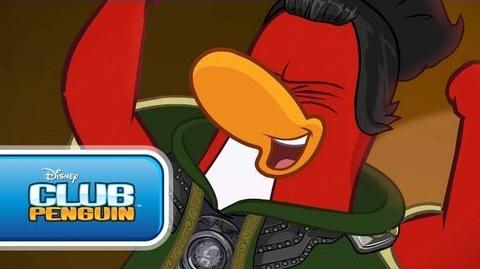 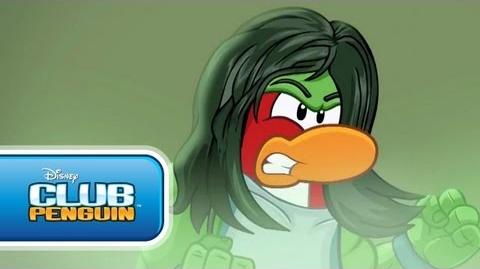 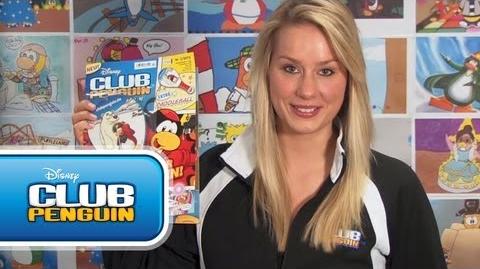