Master Mechanic was a medium difficulty stamp in Club Penguin. In order to obtain this stamp, the player had to put a cannon in every possible socket in any one level of System Defender. 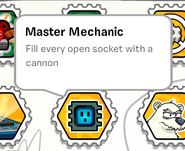 SWFEdit
Retrieved from "https://clubpenguin.fandom.com/wiki/Master_Mechanic_stamp?oldid=1875497"
Community content is available under CC-BY-SA unless otherwise noted.