At the Mountain there was a "Magic Mirror" which operated in a way similar to that of a "Magic 8" ball. In the Gift Shop's catalog Penguin Style there was a dragon, knight and princess costume for Member Penguins, and a note from the party committee about preparing for this party hidden behind the clothing catalog. The free item was the Squire Tunic at the Dock. The Wizard Hat was also re-released at the Lighthouse.

This was the first party to include an exclusive room which is only available during special events called the Treehouse Fort, which was located above the Forest.

A sketch from the blog, of the Town. 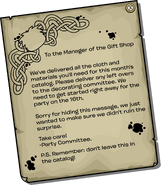 A secret message hidden in the back of the Penguin Style in May 2008, hinting the party 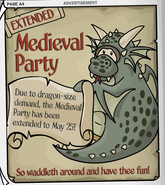 Work in progress sketch of Lighthouse