Megalodon is a prehistoric shark that lived from the Oligocene to the Pleistocene epoch. It first appeared during the Prehistoric Party 2013 trapped inside the Iceberg, at the time called Scary Ice, where it would sometimes open its mouth. The shark was immobile, but would move its eyes when you drill in its proximity. At the Prehistoric Party 2014 the shark somehow escaped the Iceberg. If you go to the Iceberg you will not see it there, only an empty space where it once was, leaking into the water. There was also an article in the Club Penguin Times that said there have been sightings of a mysterious creature swimming near the Iceberg, possibly the megalodon. It is believed that changes made in the past caused the ice to grow weaker over time, allowing the megalodon to break out of the Iceberg in present times.

According to Lorna's book in Club Penguin: Monster Beach Party, Megalodon just wants to have a friend and has no intention of harming anybody.

Megalodon is a prehistoric shark from the Cenozoic era that lived approximately 28-1.5 million years ago at a maximum length of 50 feet.[1] It is a deadly predator, being the largest species of shark known.

Frozen inside the Scary Ice

Scary Ice without the megalodon 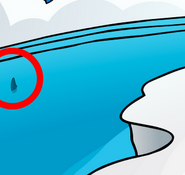 Spotted in present day Club Penguin at the Iceberg

As seen during the Marvel Super Hero Takeover 2013

A megalodon painting in the Classroom during the School & Skate Party

The Megalogon in Aqua Grabber, chasing the "Wrong Game" Penguin

In Rockhopper's Subconscious during the Inside Out Party 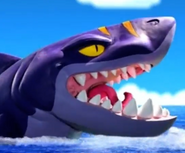 As a drawing in the School & Skate Party homepage background