Melmonst was a mutant moth from the Stage play Squidzoid vs Shadow Guy and Gamma Gal, and the seldom-speaking sidekick of Squidzoid. He was present on the set of the play from its fourth showing, in October 2009, onward, appearing as a set piece. This set piece of him also appeared in the game Red vs Blue in the Arcade as a target.

Unlike most characters from Stage play, Melmonst was not played by an actor, but was part of the set. He did not have any lines or a costume.

The fourth version of the set for Squidzoid vs Shadow Guy and Gamma Gal, featuring Melmonst 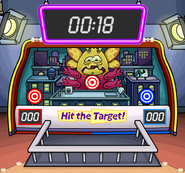 Melmonst in the game Red vs. Blue
Community content is available under CC-BY-SA unless otherwise noted.
Advertisement