Membership cards, also known as Game Cards, are real life gift cards that can be purchased for membership on Club Penguin. This is one of the simplest ways to become a member, although they are an uncommon method of attaining membership. These days people just use credit cards like PayPal.

By late December 2007, the cards were sold in Target/SuperTarget stores, Toys 'R Us stores, Walmart superstores, CVS Pharmacies, Best Buy stores and Rite Aid Pharmacies nationwide (United States), and in Sainsbury's (United Kingdom) in the following months [1]. To be a member using these cards, you will still have to pay the same membership fee. It is possible to get Membership cards free from sites. More Recently, supermarkets in Brazil and in the European Union are able to obtain Membership cards and the items they give.

Recently, unlockable items have come with membership cards. Here is a list of them. 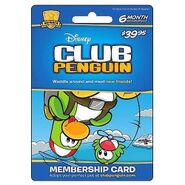 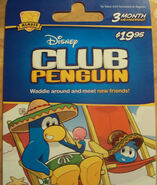