The Meteor Strike was an event in Club Penguin involving a meteor crash. It took place from June 7, 2012, to June 13, 2012. This was the period in which the Meteor landed at the Dock, leading up to the Marvel Super Hero Takeover 2012. It only had one room, the Dock. According to an EPF message, the meteor had also given the Ultimate Proto-Bot 10000, an evil robot, the power to destroy Club Penguin.

Part one of the article

Part two of the article

Another sneak peek on the cover of the Club Penguin Times, but this issue being issue #346 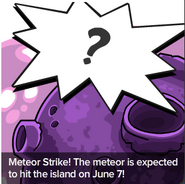 An ad in the Club Penguin Times

Dock
Add a photo to this gallery
Retrieved from "https://clubpenguin.fandom.com/wiki/Meteor_Strike?oldid=1875576"
Community content is available under CC-BY-SA unless otherwise noted.