The Mine Shack was an area located on the outskirts of Club Penguin Island. Originally an abandoned mining shack, it had since been repaired and then served as a hub for various other locations, including the Forest and Skatepark. The underground of Club Penguin also lies below the shack.

The shack had a variety of plants growing around it, in the form of a garden, as well as a large tree that has been growing since 2010. The Mine Shack also served as the outdoor area for the nearby School.

The Mine Shack opened on May 29, 2006, after the Underground Opening Party ended. It was originally going to be released as a surprise alongside Cart Surfer, but since the game was delayed, the room was released early to make up for the delay.[1] The game released a week later.

According to Aunt Arctic in issue 71 of The Penguin Times, shortly after the underground rooms were opened at the aforementioned opening party, some curious explorers took a ride on a mine cart, wanting to see where the track led. Eventually they surfaced from a pile of snow at an unknown location near mountains. The explorers noticed the pile of snow had what looked like a doorframe, and decided to dig it out, and eventually finished, discovering the long-abandoned shack.

On April 17, 2010, construction began in the Mine Shack to make it look nicer. By the time the Earth Day 2010 party started, the nearby Recycling Plant was built, plants and a small tree were grown around the shack, and a watering system was installed. A path to the Forest was also opened. On June 15, 2010, the wheelbarrow with flowers in it was replaced by the Herbert Statue. This statue was used to plug up a geyser in the video game Club Penguin: Elite Penguin Force: Herbert's Revenge, first released a few weeks earlier.

Over the next several months of 2010, the small tree in the garden, known as the Community Tree, periodically grew, until it eventually fully grew at the end of September and remained that way since. Additionally, for one week at the end of July/beginning of August, some grass started growing around the tree, but after that week it was removed.

On July 11, 2013, the Mine Shack was redone from the ground up, along with a new room: the Club Penguin University, which replaced the Recycling Plant. A path to the Dojo Courtyard was also added.

On November 14, 2013, the mine track leading into the shack was replaced by a staircase. On September 18, 2014, a path to the new Skatepark was added.

The Mine Shack was renovated for the first time in April 2010. While the shack itself did not change, its surroundings did. A pit of dirt was added between the shack and newly built Recycling Plant, where a tree was planted. Initially no larger than a penguin, it has since grown larger than the shack itself. A garden, known as the "community garden" was started near the shack. Here, plants could be grown with the repaired water system on the shack. By throwing snowballs into the bucket, water would be produced and sprayed on the garden, causing plants to grow. Fully grown plants were placed within the nearby food shed.

The Mine Shack was renovated again in June 2013, and received a complete overhaul. The only elements that remained are the shack itself, the community garden (which could no longer be watered), and the community tree, which was moved to the other side of the new School. Now, there is a small path resembling a parking lot of sorts, at the end of which there is a gate with Fluffy the Fish statues and a "CPU" sign. There is also now a picnic table, a small mat with a coffee cup, guitar case, and book, as well as a volleyball net with a volleyball. After the School & Skate Party started, the picnic table was removed in favor of the path extending, leading to the Skatepark. 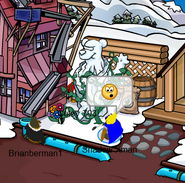 The 2010–2013 Mine Shack with water system activated, plants grown, and shed filled

As seen on the Club Penguin app