The only way to find this pin was to be in the Underwater. However, it was impossible to get into this room without the pin unless the penguin played the game Puffle Rescue.

In the game, the penguin had to play the members-only Underwater Level of Puffle Rescue. After saving the black puffle, the Giant Squid would appear and swim out to sea, leaving a trail of bubbles behind it. The penguin had to use those bubbles to chase the giant squid to a coral reef far out to sea, where there would be a staircase which led into the Underwater room, where the Penguin could get the Moss Key Pin. 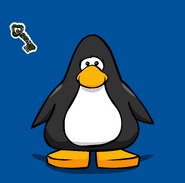 The Underwater room while it was hidden

Retrieved from "https://clubpenguin.fandom.com/wiki/Moss_Key_Pin?oldid=1919044"
Community content is available under CC-BY-SA unless otherwise noted.