The Mullet is a large red fish found in Club Penguin. It can be seen in remote games and locations on the island.

To catch a Mullet at the end of Ice Fishing, bait it with a yellow fish and you will receive an extra 100 coins. In Aqua Grabber, in the level Soda Seas, it is possible to catch the Mullet by first catching a worm in an air pocket in one of the caves, then use the worm to catch Fluffy the Fish; then use Fluffy to catch the Mullet, which can be returned to the net for 1000 extra coins and the Mullet Capture stamp, or just be let go. Either way, you'll remove the Mullet from the cave, which is blocking the entrance to another cave. Go into the cave, where you try to retrieve Coins from a Crab. If you don't take any of the Coins from the Crab, he will give you the emerald, which is the rare treasure in Soda Seas. Real Mullets are small in real life but big in Club Penguin. It is completely red while a real Mullet is white with red spots.

Mullets are also catch-able in the DS version in a similar way to how it is caught in the online Club Penguin, you must use a medium sized fish. However, the Mullet in the DS version only appears if you don't collect any squids.

According to an old Club Penguin Times article, the Mullet was discovered by an unknown penguin and he mounted it on the wall at the Ski Lodge. It was thought to be the last of its kind until rumors started about more of them hidden in the water. Ever since, it has been a popular dish consumed by penguins, and has appeared on many stamps, postcards, items and even parties.

How to catch the Mullet

After you get 60 fish, 3 more fish will appear. Catch 2 of them and keep the last one as a bait for Mullet.

A Mullet, seen in Ice Fishing.

A Mullet caught by a penguin.

A Mullet on the wall of the old Ski Lodge.

A Mullet in the new Ski Lodge.

A penguin catching a Mullet.

A Mullet decoration on the Ski Hill during the Water Party 2008.

A Mullet in the Ski Lodge during a Halloween Party. 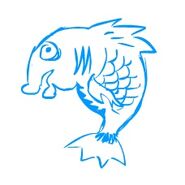 A wallpaper featuring a Mullet.

A Mullet on the Season's Greetings postcard.

A modern design of a Mullet.

A Mullet while escaping. 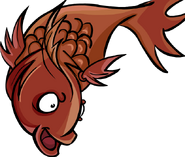 As seen in issue #167 of the Club Penguin Times.
Add a photo to this gallery 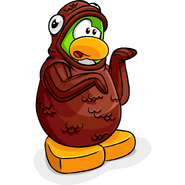 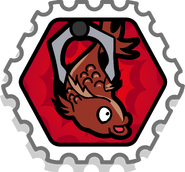 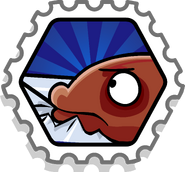 The Mullet Necktie.
Add a photo to this gallery

Retrieved from "https://clubpenguin.fandom.com/wiki/Mullet?oldid=1757611"
Community content is available under CC-BY-SA unless otherwise noted.