Never Wake a Sleeping Sensei is an animated short. It first aired on December 3, 2011 on the Official Club Penguin Blog, and on their official YouTube account.

It starts with a zoom-out shot of the Dojo. Four ninjas are playing Card Jitsu. One accidentally hits Sensei in the face with a snowball. Sensei wipes the snow off his face, and tells the ninjas that they must learn how to work as a team without fighting with each other. He then takes a nap. Later, the red ninja finds out that Sensei is sleepwalking. The yellow ninja tries to wake Sensei up with a gong, but the dark blue ninja tells her that if you wake a sleeping Sensei, you will cause an explosion.

As Sensei leaves the Dojo, the ninjas scramble out the door to avoid him from walking off a cliff. The ninjas make a bridge across the cliff, and Sensei safely crosses it. The yellow penguin's head gets stomped on by Sensei as he heads into town. Sensei sleepwalks into the Plaza; then into the Pizza Parlor, where he almost walks into the Pizza Oven while there is a fiery inferno inside it. The penguins make Sensei turn around and head out the door and an aqua penguin says, "Check please."

Sensei finally makes his way back to his cushion in the Dojo. The blue and red ninjas high five each other, and Sensei winks, revealing that he was awake the whole time, making the ninjas work together to keep him safe.

A storyboard for the episode revealed at Club Penguin Summit 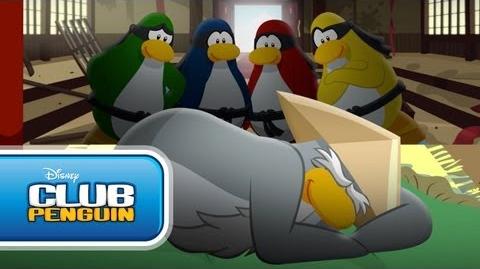