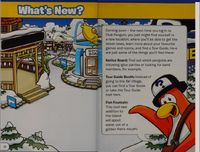 The news room was a cancelled room in Club Penguin. It was first shown on page 18 of The Awesome Official Guide to Club Penguin, where it was labeled as "coming soon". This was planned as a sneak peek for the room, exclusive to the book.[1] Due to developers being too busy with other projects at the time, the room was never made.[2]

According to info on the room's page in the guide, the room would have contained a Fluffy the Fish fountain, a Tour Guide building, which would have been a replacement for the Tour Booth in the Ski Village, and a gazebo of some sort. There would have also been news board used for finding igloo parties, that would have allowed players to create posters to put on the board.[2]

The room was designed to serve as an introduction to the game, geared towards younger players. This general concept was later used as the Welcome Solo room. One idea for the room was to have a balloon ride that would show various rooms on the island. This idea was later repurposed for the Hot Air Balloon Ride and Santa's Sled.[2]

The elements of the room used in the Town

Also a full page showing and describing the room.

Retrieved from "https://clubpenguin.fandom.com/wiki/News_Room?oldid=1921022"
Community content is available under CC-BY-SA unless otherwise noted.