Club Penguin Wiki
Register
Don't have an account?
Sign In
Advertisement
in: Night of the Living Sled

Night Of The Living Sled (series)

Night Of The Living Sled is a series of short silent films that are played during Halloween Parties. The first movie in the series was released in 2007, and the series has been available every year since.

The films are about an evil sled (a toboggan), brought to life by a mad scientist, and each one of the films features the Sled chasing two penguins around the Club Penguin Island.

The scene lights up. One can see a penguin in a graduation hat. Pulling a switch, the scientist zaps a toboggan with their machine. Rising from the table, they let out an evil laugh. "BWA HA HA! IT'S ALIVE!" The camera cuts to outside, where the sled is hopping around, terrorizing two penguins. One runs off screaming "AAAAAAHHH!", while the other uses the Surprised emote. The movie ends.

The scene lights up. The two penguins from the original, still screaming, run into an Igloo. Once inside, one of them asks "Is the sled still chasing us?" The other answers "No, I think we lost it!" They then look out the window, only to find that the Sled is still in pursuit. "Oh no! It's right outside!" they scream. The first penguin says "Quick! Block all the entrances!" The two penguins pile furniture in front of the window. They then stand back, looking at their barricade, as one proclaims "That should do the trick!" The other responds with "Yeah! Did you block the door too?" The two penguins share a surprised look. The first penguin answers "No... didn't you?!" As the realization hits them, the camera cuts to the Sled entering through the open door. The penguins scream, and run through the igloo wall. The Sled follows. The movie ends.

The scene lights up. The two penguins run through Ski Village, still being chased by the Sled. They decide to run to the top of the Ski Hill, believing that they will lose it there. "Now we'll be safe." says one penguin. "OH NO! It's the sled!!" the other points and screams. The first penguin looks over, surprised, but it's shown to just be the Sled Racing catalog, which they smugly tell the other. "Not that sled. The other one!" they say, pointing again. The camera shifts to show the Living Sled standing next to the toboggan. "Hurry! Let's escape on those tubes!" says the first penguin. They both get onto the tubes, sledding down the hill. "Now we'll get away for sure!" the second penguin declares. The first points up the hill and says "It's right behind us!" The camera pans to show the Living Sled sliding down the hill. The first penguin shouts "Look out for that rock!". The camera zooms out to show a rock near the end of the track. The two penguins dodge it, but the Sled does not, and it is knocked off the ground. "Did you see that? We got away!" says one of the penguins. The other is shown yelling, before they both crash into a snowbank. The subtitles say "Look out for that..." They both pop out of the top, the same penguin spitting out some snow, before finishing "... pile of snow." The other looks around. "Hey! We did it! We got away from the sled!" they cheer. The first penguin smiles, saying "You're right! I'm so happy!" They both laugh, until the Sled pops out of the snow behind them. The movie ends.

Night of the Living Sled: Live!

Night of The Living Sled (Live) was first shown at the Stage at the Halloween Party 2011. It is a retelling the events of the first three films.

Night of the Living Sled IV

The scene lights up. The camera pans over to the Evil Scientist, looking sad. They sigh. "My sled never came back. I wonder if it's ok?" they say. Suddenly, there's knocking on their door. They smile, before being surprised at the sight of the penguins from the prior movies bursting in. "Help! There's a sled chasing us outside!" one of them shouts. The scientist smiles once more. "A sled! I want to see!" they say excitedly. They poke their head out the door, their face falling. They look at the Sled, aghast. They press their back to the wall. "It's scarier than I thought! they exclaim, "We have to destroy it!" The scientist then pushes a button to seal the door shut, and walks over to their lab from the original film. "This machine can deactivate the sled." they explain, and use a remote control to retract the table into the floor. It now has a large "X" on it. "We have to get the sled on this X." One of the penguins asks "But what will we use for bait?" The other two both look at them. "No! Not me! What about you?" they glare at their friend, who shakes their head. The two penguins then look to the scientist, who is shocked. "No way! It's too dangerous!" they protest. The scientist thinks for a moment, before coming up with an idea. "I know what to do!" they say. The camera then cuts to them putting a bucket with a face on top of Java Bag. It zooms out, showing the completed dummy. "We can use this for bait!" the scientist explains. The camera pans to the side, where one of the two penguins stand. "This will definitely work! What do you think?" They look to their side, where the other stands, as the camera continues to pan. "I think it's perfect! How about you?" they ask, looking to their side, before doing a double take. The Sled is standing right next to them! All three of them scream in shock and run away, the sled following. The movie ends.

Hotel of the Living Sled

The camera pans down on a backdrop of the Plaza from the Halloween Party 2014. It then cuts to the Living Sled Penguins in the Puffle Hotel Lobby, exploring the hotel. One of them jumps on the couch, while the other rides around on the luggage cart. The first penguin then falls off the couch with a crash. the other penguin approaches him and exclaims "I like the toboggan over there!" The first penguin gets up, wide-eyed, and replies "I don't see a toboggan over there." The camera pans over to the empty reception desk as the other says "Come on!" and urges them to explore some more. Just as they leave, the Living Sled creeps up from behind the reception desk, with a dramatic close-up. The penguins then walk through the Sitting Room. The Living Sled then appears behind a couch, as the penguins go to the Ballroom. The first penguin, still alert, continues following slowly behind the other. The Living Sled appears again, this time behind a pillar. The penguins then arrive in the Dining Room, where they see a blur dash past them. "Whoa! What was that?!" the second penguin asks, now frightened. The two then run off screaming, as it's revealed the Sled is once again chasing them. They continue running through the Pool and the Library, as the Sled still follows. They then run into the Deluxe Suite, but realize too late that the room doesn't have a floor. They scream and fall far down, before landing with a crash. Cut to black. From their perspective, we see the first penguin blinking up at the other. "Are you ok?" the second penguin asks. "What happened?" they ask in return, getting up from the floor by the couch. It is then revealed that the previous events were merely a dream the first penguin had after slipping and hitting their head. They then continue exploring the hotel, but just as they leave, the Living Sled appears once more behind the couch. The movie ends.

Each one of the clips has its unique soundtrack, which follows the plot. The only instrument in each one of the soundtracks is a piano. Only Night of the Living Sled IV is more of an animated sketch, where only the sound of a movie projector can be heard. 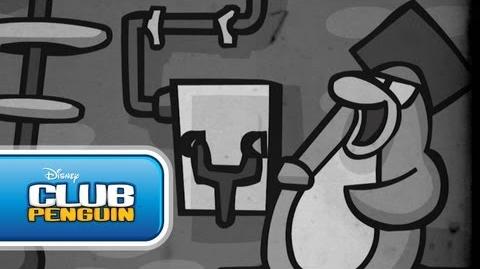 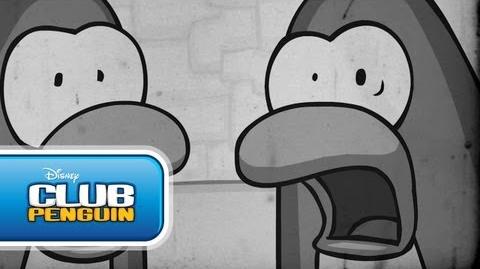 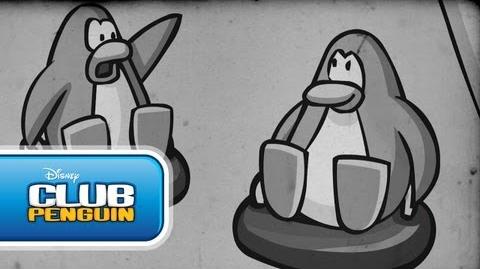 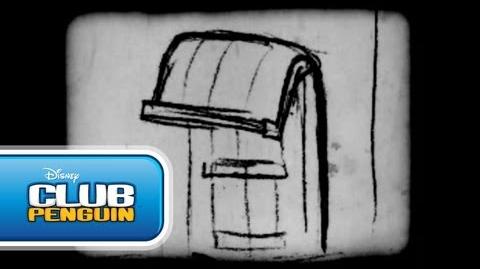 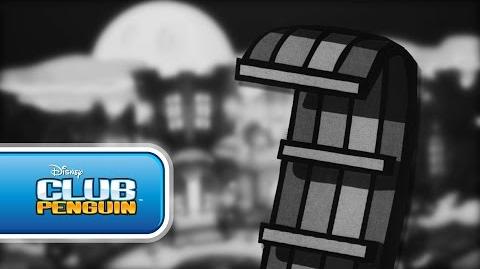 The title sequence as shown at the Dance Lounge

The title sequence for Night of the Living Sled 2 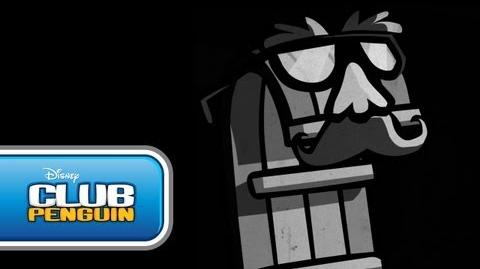