Operation: Hibernation was the first operation for the EPF. Its objective was to locate Herbert and put him into hibernation, so he wouldn't be able to attack the EPF.

The operation started on August 25, 2011, when the Great Snow Race began, but it was planned much earlier in the Track Herbert level of the System Defender, in order to track Herbert's location.

It was an operation to capture Herbert. When you completed the final System Defender level, you would find out that Herbert is hiding out at the Toughest Mountain, the site of the Great Snow Race. At the Toughest Mountain, you would have to put him into "hibernation", but first you had to get through a Laser Maze. Once you had gotten through the Laser Maze, you had to use the Expedition Key Pin to unlock the door, taking you to the Classified Area. You then had to throw snowballs at the control panes to dismantle the alarms. Then, using the parts that G teleported into the Classified Area, you had to build an air-conditioned box around Herbert and Klutzy. Once you had defeated him, you earn the AC 3000 Pin and 3 medals. However, Klutzy escaped.

The CP Times article where the secret message was hidden. You could click on the Elite Penguin Force badge for the secret letter

Classified Area while the alarm was on

What players would see if they tried to access the Classified Area, but were not agents 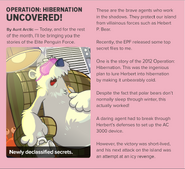 An article in the Club Penguin Times about Operation: Hibernation. (Note: The operation occurred in 2011 not 2012.)
Add a photo to this gallery