Operation: Hot Sauce was the third EPF in-game mission in Club Penguin. It began on April 5, 2013 and ended on April 18, 2013. Information was released regarding the mission in the form of a sketch, however, there was no release date until Issue #388 of the Club Penguin Times where the Cove was shown with stains of hot sauce.

Possibly upset about his defeat during Operation: Blackout, Herbert accompanied by Klutzy attacked the Pizza Parlor, vandalized it and stole a large hoard of pizza along with the giant bottle of hot sauce that was connected to the oven inside, which he later utilized inside his newly built lair what he secured by building several defensive mechanisms such as an invisible entrance at the shores of the Beach. At the same time, Rookie was hosting a Pizza Party at the Cove, but it was canceled due to the Pizzatron 3000 being "Out of Order" since the giant hot sauce bottle from the Pizza Parlor had been stolen.

Herbert was sure his lair could not be found. The EPF Agent was assigned to the task of recovering the hot sauce bottle by The Director of the EPF and the agent's EPF phone was upgraded along with new features to aid them in the task of finding the missing hot sauce bottle and the thief who stole it. The agent then calibrated the TraceTracker 3000 or the TraceTracker 100 using evidence found at the Pizza Parlor and discovered footprint tracks left by Herbert and Klutzy. The footprints eventually led to the beach, where the secret entrance to Herbert's lair was hidden. After successfully solving the lock to the lair's door using their EPF phone's new "Entry Gainer 3000" feature, the agent entered the lair.

Inside, Herbert had in his possession a water pump machine to drain the water that was constantly flooding inside the lair, since it was located underwater. If the agent stayed long enough in the lair without doing anything, Herbert heavily hinted that what he was working on a new, much larger bomb compared to the Popcorn Time Bomb and Cream Soda Sticky Bomb to make Club Penguin a tropical paradise using the destroyed remains of the Solar Laser. The agent fooled Klutzy by throwing a slice of pizza on the "Flood" switch of Herbert's water pump machine. Klutzy, who was hungry subsequently walked onto the switch and to Herbert suddenly noticing with shock and horror, the lair flooded. The EPF agent was able to retrieve some pizza from the flood for the Pizza Party, along with the giant hot sauce bottle, which was returned back to the Pizza Parlor.

If the agent looked through the Cove Binoculars on the lifeguard stand at the Pizza Party at the Cove in the aftermath of completing the mission, they could see Herbert angrily waving his fist in the air alongside Klutzy reaching for pizza lingering in the ocean, while both on the solar laser floating in the ocean. In the end, Club Penguin Island was safe once again.

The Login Screen for the Mission. Note: Human footprints

The Logoff Screen for the mission. Note: Human footprints

Beach with footprints visible and the door to Herbert's lair open

Cove after completing the mission 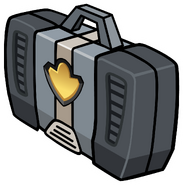 Part of the HUD for the mission. This part allows you to collect clues

A "snow angel" of Klutzy at the Dock

A "snow angel" of Herbert at the Dock

The Cove Binoculars after the operation is completed

Herbert welding in his lair

The homepage designed for the mission