Operation: Puffle was a mission in the series of in-game EPF missions and an event in Club Penguin, it lasted from November 21 to December 5, 2013. Agents were given the task of working together to catch puffles of each color under mind control to remove their Brain Boxes to rescue them, and put a stop to Herbert P. Bear's scheme.

November 1: Herbert-sized footprints were reported in the wild and Jet Pack Guy was sent to investigate.

November 7: It was reported that there was trouble in the wilderness. On that same day, parts from the boiler were stolen.

At some point, likely around the time of November 7: Herbert P. Bear had most likely broken into the Indestructible Containment Environment and had stolen the 'Puffle Transmogrifier' (a failed invention by Gary). Herbert most likely modified or adapted from it (this is heavily hinted in the Support Story from Club Penguin Times issue #422) to create the Brain Box, which whoever wore it, became mind-controlled.

November 14: Four puffles, consisting of the Keeper of the Boiler Room, Keeper of the Stage, Plok and the Black Puffle at the Mine were reported as missing.

Between the time of November 14 and November 21: more puffles had been going missing.

As Operation: Puffle began: Herbert, at this point, had far more puffles working for him. Puffles of 10 colors, wearing Brain Boxes, were turning up in the wilderness under mind control. Herbert intended for puffles to surface the wilderness, dig up coins and deliver them back to him via tunnels non-stop (at least until a very long time away, according to Club Penguin Times issue #423).

The Director of the EPF and Gary the Gadget Guy informed agents about the mind-controlled puffles that dig up coins to bring them to an unknown location. The mission was to collect the Brain Boxes, to use their microchips to trace the source signal.

After collecting all microchips, the source signal was found in a secret lair, the player was sent into it, along with the microchips, to disable the signal and save the puffles. The player was trapped surrounded by fire immediately upon infiltrating, and Herbert's intentions were revealed, he invented an antennae tower to mind-control puffles who wore his Brain Boxes, to force the puffles to dig up coins for his stolen coin-operated boiler to keep himself warm to survive the cold. The player, while unnoticed by Herbert or Klutzy, broke into the ventilation, after avoinding clouds of steam and exiting on the other side, the player reached the antennae tower and shut it down by using the microchips, which freed the puffles who then carried Herbert away, with Klutzy following after him. Herbert's plan was foiled, puffles returned to their homes, and the player was granted with the Puffle Freedom Statue and 5000 coins. The enormous amount of coins that Herbert had been hoarding was donated to Coins for Change, a suggestion by Rockhopper.

Herbert's appearance in the trailer for the Halloween Party 2013

The logo, as seen in the ZOMG ZOMBIE PENGUINS video

EPF message from Dot, which was most likely linked to Operation: Puffle

A Brain Box, along with its blueprints on a bench, as seen on ClubHerbert.com

Sneak peek of Herbert's lair, from the What's New Blog 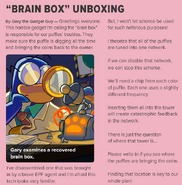 The Operation: Puffle Agent Interface after completing the mission

The Cove Binoculars during the party

The Map during the party 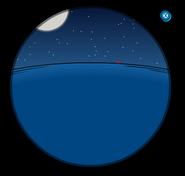 The Beacon Telescope during the party

The Membership Pop-Up of the party's exclusive member items