Operation: Tri-umph (alternatively known as Operation: Doom) was an EPF operation that started on February 10, 2016, and ended on March 2, 2016. During this event, Herbert P. Bear attempted to blast the island rooms, shrink EPF Agents and uncolorize the island, using the UFO's stolen power source. During the last week of the event, players could enter the Cave Maze for the second time in an attempt to stop Herbert's plans, and retrieve the power source. 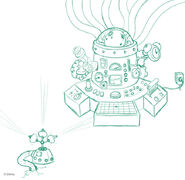 A sneak peek of Operation: Tri-umph posted on the What's New Blog

The homepage and login screen

The homepage and login screen without the logo