Were you looking for Elite Penguin Force Missions?

PSA Secret Missions were point and click-like games that Secret Agents could play to earn medals, awards, as well as experience in helping other penguins. They could be accessed in the HQ by clicking on the Mission Console in the lower right-hand corner. There were eleven secret missions. The Secret Mission's codename was "adventure". After the HQ was destroyed in May 2010, the missions were moved to the VR Room. No new missions were made after this, but Field-Ops served a similar purpose to missions, but on a much smaller scale. On December 6, 2012, due to the VR Room being destroyed, missions were moved to the "Fun Stuff" page.[1] Awards from completing the missions could not be received, as these missions were played outside of the game, with no way of connecting to an account.

On June 11, 2015, they were brought back under the premise of training, where they were known as EPF Training Missions. EPF Medals could be earned upon completion of these training missions, and awards could be obtained again.

Case of the Missing Puffles

Aunt Arctic has lost her two puffles, one green and one purple, and the player must go out and search for them. A medal is available upon completion of the mission, and the player is able to obtain a letter from Aunt Arctic providing the player finds the pictures of her puffles. This is also the only time the Tallest Mountain is ever shown, aside from the Festival of Flight 2009 in August 2009. The puffles are found at this location.

Case of the Missing Coins

The Gift Shop has lost its coins from the vault. The player has to find out what happened to them. As with the other two missions, a medal is obtained upon completion of the mission, but a card from Dancing Penguin, is obtainable if the player accepts Gary's extra mini-mission and restore power to the Night Club.

This mission starts out in the HQ. Gary opens the door to the gadget room, and the player gets a life preserver shooter. The player then collects various items around Club Penguin to save 4 penguins trapped on a cliff. At the end of the mission, the penguin gets a medal with an inner tube on it and a letter which later self-destructs. You can also obtain an award if you use a belt to fix the Ski Lift in the Ski Village. This mission has huge references to both real-world and Club Penguin events, not to mention many of the Moderators.

Secret Of The Fur

This mission starts out in the Gadget Room. Gary analyses the white fur, and does not get a result, except for Hot Sauce, Hot Chocolate and Jet Pack Fuel. The player then collects these three items around Club Penguin. At the end, players find that the White Fur belongs to a Polar Bear (who has a crab with him). At the end of the mission, penguins get a medal with a Magnifying Glass and fur on it. The player can also obtain a pizza. When clicked, a slice is eaten. Once the pizza is eaten, one can open and close the item, and there is more pizza to eat. Your penguin will never grow hungry again! This item can only be obtained if you deliver a pizza to the penguin who is Ice Fishing. To complete the mission the player must find the true source of the fur carrier, and catch the crab. The player must then go to Gary and tell him of their discovery.

Questions For A Crab

In this mission, Gary attempts to "question the crab". The Crab Translator 3000 breaks, and the crab escapes. The player follows him to the wilderness and then to the cave (also seen in Mission 2), and are greeted with a locked door. The player looks around and finds the same black puffle as in Mission 2. He goes through the pet door and unlocks the door. The player goes inside and the Polar Bear locks the player in a cage. With the puffle's help, the player gets out as well. The players find their way back to Club Penguin, and the Polar Bear tries to destroy the Ski Lodge with a Mechanical Woodchopper. The player then sinks the Polar Bear and Gary awards penguins with a medal for "thinking outside the box" and the blueprints for an electromagnet if they give him the blueprints for the electromagnet seen in Mission 3 (which are found inside the cave).

In the mission, you must repair the broken clock in the Snow Forts by finding parts of the clock scattered across Club Penguin. The target is found at the dock being used by two Penguins from Team Blue. To get it back you must throw three snowballs at it which gets more difficult after each hit. When the two penguins need a replacement target you can give them the life preserver in the HQ, which gets you a blue pennant at the end of the mission. To get the spring you must go to the Iceberg and you will find it frozen in ice and out of reach. Then you go back to the HQ again and get the Electromagnet 2000, click on the cage it is in and there's a little puzzle lock. (You could get it at the start of the mission though, to save time.) The answer is the word 'key' in the Tic-Tac-Toe Code. Get the magnet and go back to the Iceberg; use the magnet on the spring. Go to the Gadget Room a third time and put the spring in the test chamber, pull the lever, and set it to Fire Mode. To get a gear, go to the Beach, where two penguins are sun bathing, and pick up the green bucket next to them. Then, go to the Snow Forts and use the bucket to get snow. Then you go to the Pizza Parlor and pick up a note of music next to the piano, to play the piano for the yellow puffle at The Stage. Get a picture of the gear in the Town, go the Stage and give the picture and bucket of snow to a yellow puffle in there. The yellow puffle will then make you a gear made of snow which you freeze in the HQ's test chamber. Go to the back of the clock and put everything where it should be and you're done.

Gary needs the help of Agents again. Help Gary find Herbert and see what he is up to. In this mission you will need to build your own gadgets.

In this mission, the player has to prevent Herbert from stealing the Golden Puffle. Secret Agents have to help Rookie with the Giant Magnet located in the Gift Shop, and Jet Pack Guy located at The Beach. Then you must go set the trap, and catch Herbert with the Giant Magnet. At the end, Herbert escapes, but loses a packet of seeds.

Gift: The gift will be given if you pick up the table, clothes and the balls located in the Gift Shop. Then put the table down, in the town, and the stuff. At the end of the mission, you will get the Employee of the Month Trophy.

In this mission, Herbert steals all of PSA's information and destroys the PSA HQ. Gary informs you of several missing items from the Gift Shop, and you find two piles of corn seeds after investigating. Gary calls you, but the signal is lost and the Spy Phone's teleporter stops working. Herbert hacks into the PSA computers with the computer he stole from the Gift Shop Manager's office. Gary shuts down all of the technology. Herbert attempts to broadcast all over Club Penguin and blow the PSA's cover. You stop the video feed by inserting Night of the Living Sled (it is under the piano in the Lighthouse into the DVD player. You will need to clean it with cleaning supplies also found in the lighthouse. You must solve a puzzle to track down the signal to shut off the audio source. You must go through a corn maze to reach Herbert. (Follow his paw prints to receive a map and piece of wood. Go backwards and take the paths marked with a Watering Can, Corn Seeds, Fertilizer, Hot Sauce, and Java Beans.) Use the wood to cross the river. Put the corn seeds in the torch to lower the ladder. Unplug Herbert's computer. He warps you and a popcorn bomb to the HQ. He locks down the HQ. Click the orange book under the Club Penguin map and solve the puzzle. Dot will pop out of the closet and warp you all outside (the EPF technology is fine). Popcorn shoots all over the Ski Village just as you appear in it. G gets a call from the Director, announcing the shutting down of the PSA, as the HQ is destroyed.

Extra Credit: In the lighthouse, pick up the can next to the ship wheel, and go to the Gadget Room. Put the can in the Test Chamber, and click water, then ice. Take the ice to the Beacon, and give it to Rory. He will give you a lens to fix Dancing Penguin's glasses at the Ski Hill.

Gift: Medal and Letter from Dot. If you click the red button, you get Free Spy Goggles.

In PSA Mission 4: Avalanche Rescue, the player could access Gary's Room. There were some notable things in this room: 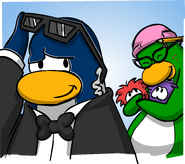 Aunt Arctic with her Puffles 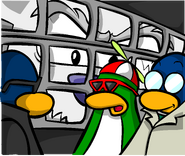 Herbert hacking into the PSA Mainframe 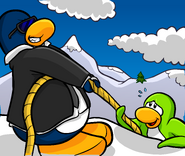 An agent saving a penguin from the Avalanche 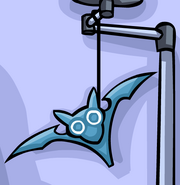 The flying fox hanging from a lamp

The logo screen during the release of the EPF Training Missions