The Paper Boat Scavenger Hunt was an event held from August 8, 2008, to August 18, 2008, to find the blueprints for Rockhopper's plans on the Ship Igloo. After finding all of the boats from the Scavenger Hunt, the player would have to assemble the boats' papers, each one is part of the full igloo blueprints, and after assembling correctly, he would be able to obtain the Blueprints Background.

The event occurred when Rory was making test paper boats out of the sketches for the new Ship Igloo and got carried away, later losing them. Players found the pieces of the sketches and blueprints and put them back together, resulting in the Ship Igloo being released.[1]

Pet Shop
Add a photo to this gallery 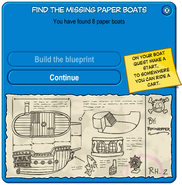 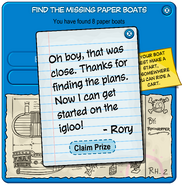