The categories consisted of:

The Stage Society narrowed down the top plays and announced their nominations on the 18th of March.

The winner of the most awards was The Quest For The Golden Puffle.

The winners of the Penguin Play Awards 2009 could be viewed at the voting booth in the Plaza on April 3.

The special guests were:

Stage construction
Add a photo to this gallery

Stage
Add a photo to this gallery 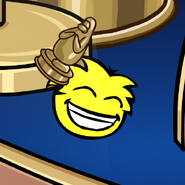 The Keeper of the Stage, somehow holding a Penguin Play Awards Trophy

Retrieved from "https://clubpenguin.fandom.com/wiki/Penguin_Play_Awards_2009?oldid=1876109"
Community content is available under CC-BY-SA unless otherwise noted.