Penguin Robots are a transformation that appeared at the Halloween Party 2015. Members were able to transform into them by going into the Robo-Maker 3000 at the Beach. 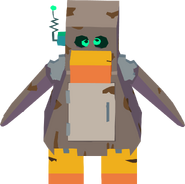 In-game
Add a photo to this gallery
Retrieved from "https://clubpenguin.fandom.com/wiki/Penguin_Robots?oldid=1876113"
Community content is available under CC-BY-SA unless otherwise noted.