All PSA agents were EPF Agents if they have passed the test. The P.S.A.'s Headquarters was known as the Spy Headquarters, or the HQ. The F.I.S.H. was their official spy handbook.

You could become a Secret Agent after your penguin had spent over 30 days or more in the game, by clicking on the (M) symbol at the top right hand corner of the game and answering a quiz you would get a chance to be an agent.

The Director has an unknown identity, but you could see a message from her in The F.I.S.H. (Factual Informative Spy Handbook). The director's signature is the very last symbol of the tic tac toe code (AA). The Director, Aunt Arctic, is also the founder of the agency. G is her right hand man who provides all the gadgets, and also provides all the missions for the Secret Agents.

Once the VR Room was built, PSA's past missions' operations continued. However, after Operation: Blackout, PSA Missions can only be played on the Club Penguin Homepage.

However, Megg posted that PSA Missions would start from June 11 and you could receive medals.

The EPF Command Room is now renovated with all PSA Missions.

According to The F.I.S.H., there are two main suspects in secret missions. 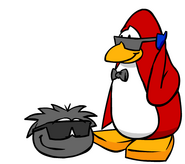 A PSA Agent
Add a photo to this gallery

Retrieved from "https://clubpenguin.fandom.com/wiki/Penguin_Secret_Agency?oldid=1906251"
Community content is available under CC-BY-SA unless otherwise noted.