Penguins Around The World was an activity connected with 101 Days of Fun. Players were told to send in their pictures to Club Penguin. To take part in this activity, players had to take a picture of their own penguin or puffle toy at famous landmarks or places related to the plush. If a player did not have any Club Penguin toys, they could also create something by themselves. To submit a picture, players had to go to ClubPenguin.com, go to the community, click on Fan Gallery, and submit their photo in the "Penguins Around the World" section. If a player's photo was selected, the community would be able to see it on the Penguins Around the World site.

A Viking penguin by the Beach

A yellow puffle in Italy

A penguin exploring the wild

A rockstar penguin standing near graffiti

A yellow puffle hanging out in a fence

A dragon standing on a giant leaf

Rockhopper relaxing by the shore

A ballerina penguin and a dragon having fun

A Red Puffle standing on the edge of a fountain

A king penguin near a castle

A diver penguin standing near a globe 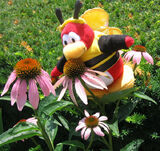 A bumblebee penguin flying toward flowers

A red puffle relaxing on an inner tube

King Ra-Ra and Boris standing near a pyramid

An explorer penguin riding on a float

Puffles hanging out in Mount Rushmore

A penguin in pajamas, getting ready for bed

A red puffle on a totem pole

Rockhopper at the beach

Two penguins in a car

Three penguins and three puffles on an airplane wing

A black puffle in a LEGO-themed setting

A red puffle inside a cannon

A purple puffle on a chair, "fishing"

A green puffle on a ship

A pink puffle listening to an iPhone

A green puffle on a mushroom

A green puffle cheering for the red team or blue team

A green puffle resting on leaves

A Rescue Squad penguin, a Viking penguin, and Gamma Gal standing near a totem pole

A Frankenstein penguin and a green puffle 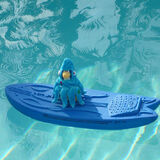 Squidzoid riding on a boat

A penguin playing Hide and Seek with a puffle

Squidzoid on an umbrella at the beach

A penguin in front of the White House

Squidzoid penguin and Bee penguin sitting on a fence in Pennsylvania

Aunt Arctic talking to a group of penguins

A king penguin, with men riding horses in the background

Rockhopper "riding" on a homemade Migrator

A Rescue Squad penguin on a gondola lift

Two puffles in England. Big Ben could be seen in the background

Rockhopper standing next to a fish

A purple puffle in a ball pit

An explorer penguin in Rome

A blue puffle on a pool table

A jester and a green puffle near a ferris wheel

A ballerina penguin near Stonehenge, located in England

A Viking penguin on a boat

Rockhopper standing near a statue

Three penguins hanging on a ladder

A black puffle near a cat

A bee penguin on some rocks

A penguin in Alaska

Rockhopper on a boat

Retrieved from "https://clubpenguin.fandom.com/wiki/Penguins_Around_The_World?oldid=1876120"
Community content is available under CC-BY-SA unless otherwise noted.