The Pet Shop was a pet store located in the Plaza, filled with fluffy creatures known as puffles. Many different types of puffles were able to be adopted here, and pet food, toys, and furniture for them can be bought here as well, through the Puffle Catalog. Two puffle themed games, Puffle Launch and Pufflescape could be played there, and the Puffle Hotel Lobby and Puffle Park could be accessed from doors on the left and right, respectively.

Other than the puffles themselves, there were many different toys that fill up the Pet Shop, tubes on the floor, walls, and ceiling that puffles crawl through, and a Gold O'berry Machine for starting a quest to adopt a gold puffle. There was also a large rug in the center of the shop, that changed color depending on the puffle the player is walking.

The Pet Shop first opened on March 17, 2006, although it was visible at the Plaza before opening. It received many updates since.

On March 15, 2011, the "COMING MARCH 15" over the Puffle Launch station was removed. On May 31, 2011, puffles were added in the tubes, where they would crawl and jump through them. On November 3, 2011, Pufflescape was added. On March 7, 2013, a shelf containing food and toys for puffles was removed in favor of a door to the Puffle Hotel, although the building was under construction at the time. On March 21, 2013, construction on the hotel was complete, and the lobby was accessible through the door. On June 4, 2013, a green carpet was added under the adoption area, and the clipboards on the wall were replaced with a personality test for puffles. On November 14, 2013, some toys were removed and others were added, and a Gold O'berry Machine was added. The design of the machine changed on December 1, 2013, although it was changed back a week later. On April 27, 2014, a Blue Border Collie and Orange Tabby Cat were added, and the door to Puffle Roundup was changed to fit the addition of the Puffle Park. 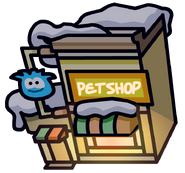 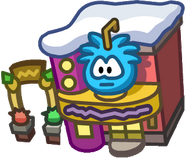 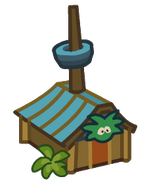 The old exterior of the Pet Shop

The exterior of the Pet Shop

The Pet Shop exterior when it first opened on March 17, 2006 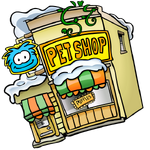 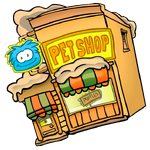 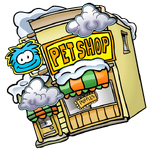 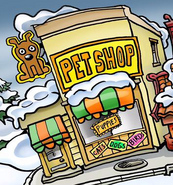 An early design of the Pet Shop, before puffles were created

Concept art of the Pet Shop, as seen on the What's New Blog 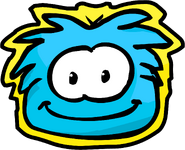 The former Puffle sign, seen hanging on the side of the Pet Shop