Pete is Puffle Handler's Orange Puffle. He appeared with Puffle Handler at the Puffle Party 2013, and in the Club Penguin Times. He was also seen in The Party Starts Now. He is known to be very crazy and hyper, and hard to train. He is also the only Puffle known to be owned by PH.

PH and Pete on the Puffle Hotel Rooftop

PH and Pete in the Puffle Hotel

Pete inside PH's igloo after performing the igloo glitch

PH with blue, pink, and purple puffles, and an orange puffle, which may possibly Pete 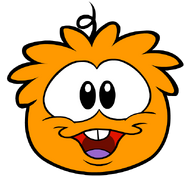 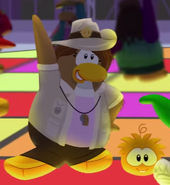 PH with Pete as seen in The Party Starts Now

Pete in game (with Puffle Handler)
Add a photo to this gallery
Retrieved from "https://clubpenguin.fandom.com/wiki/Pete?oldid=1920792"
Community content is available under CC-BY-SA unless otherwise noted.