Pi Day was an event in Club Penguin which began on March 11, 2015 and ended on March 18. It was first announced in issue #489 of the Club Penguin Times. Players were able to throw pies at the Mine Shack instead of snowballs. 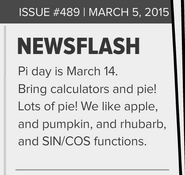 The poll, from the Fun Stuff section
Add a photo to this gallery

Retrieved from "https://clubpenguin.fandom.com/wiki/Pi_Day?oldid=1876165"
Community content is available under CC-BY-SA unless otherwise noted.