The Pirate Crabs were a group of crabs who were acquaintances of Rockhopper which were based at Swashbuckler Trading Post.

Like penguins, they were keen listeners to Rockhopper's adventures over the seas; and when the aforementioned pirate mentioned Club Penguin Island, which they appeared extremely "keen" about, they boarded the famed pirate's ship and sailed towards the island. After reaching a close proximity to the island, the pirate crabs crashed the second Migrator and invaded the island.

Following the first steps of their invasion process, they began rounding up Rockhopper's treasure so that they could bury it where no penguin - including Rockhopper - could find it.

The crabs later departed from Club Penguin Island after Rockhopper gave them a fake map he had created.

Pirate crabs seen in issue #474 of the Club Penguin Times

A group of pirate crabs facing off against a penguin 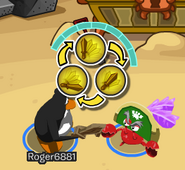 A pirate crab dueling with a penguin

As seen in issue #475 of the Club Penguin Times

As seen on page 2 of the finale comic 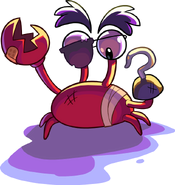 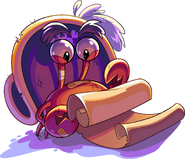 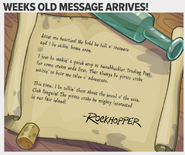 An animation of the pirate crabs at the Plaza
Add a photo to this gallery
Retrieved from "https://clubpenguin.fandom.com/wiki/Pirate_Crabs?oldid=1876315"
Community content is available under CC-BY-SA unless otherwise noted.