The Pizza Chef is a penguin in Club Penguin that wears a Pizza Apron and Chef Hat and works in the Pizza Parlor. He appears in several Secret Missions and also appears in Club Penguin: Elite Penguin Force. He is usually very busy, and asks the player to deliver pizzas for him in most of his appearances.

Missions he appears in 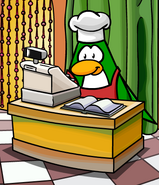 The chef in PSA missions 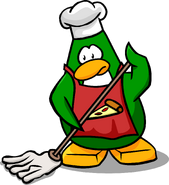 The Pizza Chef mopping
Add a photo to this gallery
Retrieved from "https://clubpenguin.fandom.com/wiki/Pizza_Chef?oldid=1911805"
Community content is available under CC-BY-SA unless otherwise noted.